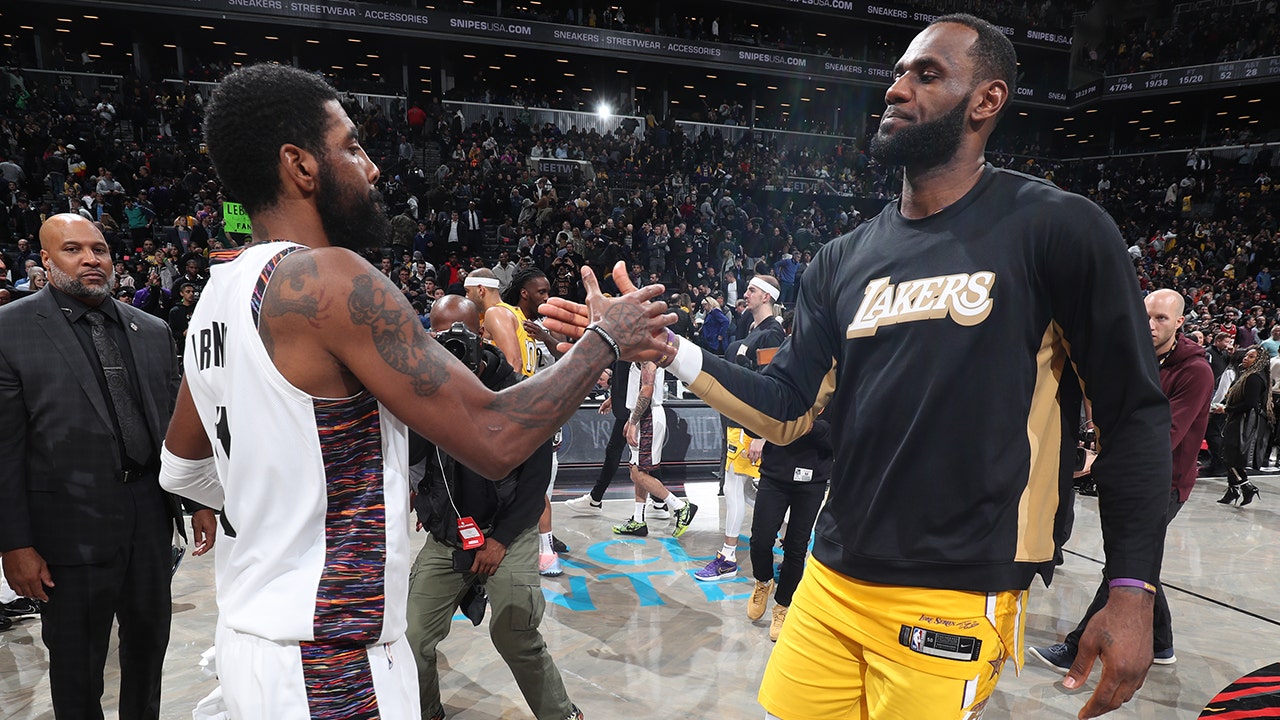 The Los Angeles Lakers are reportedly the front-runners in the sweepstakes for Kyrie Irving as the point guard’s days with the Brooklyn Nets appear to be over.

Irving opted into the final year of his contract ahead of the start of free agency after failing to find a partner to facilitate a sign-and-trade. But with Kevin Durant requesting a trade, the Nets appear to be working on a deal for Irving too.

LeBron James (23) of the Los Angeles Lakers in action against Kyrie Irving (11) during a game against the Brooklyn Nets at Barclays Center Jan. 23, 2020, in New York City.
(Matteo Marchi/Getty Images)

NBA journalist Marc Stein wrote in his SubStack column Sunday that LeBron James is “rooting hard” for the Lakers to acquire Irving.

James and Irving have a history. After the two led the Cleveland Cavaliers to an NBA title in 2016, the two superstars had a falling out, and Irving was traded to the Boston Celtics. In May, Irving said he regretted his dispute with James that resulted into the Cavaliers’ split.

The Brooklyn Nets’ Kyrie Irving reacts after hitting a basket against the Cleveland Cavaliers during the first half of the opening game of the NBA play-in tournament April 12, 2022, in New York.
(AP Photo/Seth Wenig)

“We didn’t talk during that time,” Irving told the “I AM ATHLETE” podcast in May. “Again, when I look back on what I was going through at that time, I wish I did, because it would’ve been a mutual understanding of what the future will hold for both of us, and we know how much power we both had together.

“Me and him in the league together running Cleveland and then being able to put a better team together every single year would’ve definitely been worth it.”

Should a deal get done between the Nets and Lakers, Yahoo Sports reported Russell Westbrook could be traded to Brooklyn.

Kyrie Irving, left, of the Brooklyn Nets and LeBron James of the Los Angeles Lakers shake hands after a game Jan. 23, 2020, at Barclays Center in Brooklyn.
(Nathaniel S. Butler/NBAE via Getty Images)

The two sides are reportedly optimistic a deal could get done. The Lakers have an eye on Seth Curry in addition to Irving, Yahoo Sports reported.

Ryan Gaydos is the sports editor for Fox News and Fox Business. Story tips can be sent to [email protected]

Another poor start dooms the Nats to another loss, their sixth in a row